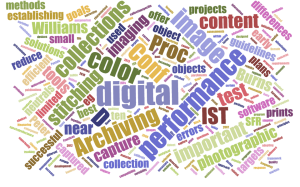 Word Cloud for our publications on this page

Thinking Outside the Color Profiling Capture Box, D. Williams and P. D. Burns, Proc. IS&T’s Archiving Conf., 2021
Color-capture systems use color-correction processing operations to deliver expected results in the saved image files. For cultural heritage imaging projects, establishing and monitoring such operations are important when meeting imaging requirements and guidelines. To reduce unwanted variations, it is common to evaluate imaging performance and adjust hardware and software settings. In most cases, these include the use of ICC Color profiling software and supporting measurements. …

Refining the Theory-to-Practice Path for FADGI Still Imaging, D. Williams and P. D. Burns, Proc. IS&T’s Archiving Conf., 2020
The Still Imaging guidelines report of the (Federal Agency Digital Guidelines Initiative (FADGI) continues to be a living document that has evolved from its initial digital imaging principles of over a decade ago. The guidelines have been adapted to the realities of day-to-day cultural heritage workflows. …

Into the Deep: Adapting ISO Methods for Measuring Depth-of-Field,  D. Williams and P. D. Burns, Proc. IS&T’s Archiving Conf., 2018
Monitoring of imaging performance is well-established and the subject of both imaging standards and guidelines for cultural heritage institutions. To date, emphasis has been on the imaging of flat object. As more three-dimensional content is being captured though, performance metrics for this class of materials need to be introduced and considered. Chief among these is depth-of-field (DOF), the distance of acceptable focus …

Going Mobile: Evaluating Smartphone Capture for Collections
P. D. Burns and D. Williams, Proc. IS&T’s Archiving  Conf.,  2016
There are now institutional guidelines that define several image quality measures, and set performance requirements for image capture. Important image characteristics include the influence of lighting, lens focus, and several aspects of general imaging practice. As cameras in mobile-telephone cameras have improved, however, these are sometimes used as convenient document scanners. Addressing the evaluation of image resolution and optical distortion, we describe how imaging performance can be evaluated against US federal (FADGI) and Matamorfoze guidelines. Results from our smartphone test indicate that, for the attributes tested, the unit would meet at least three-star performance for up to A4 document scanning, and possibly better…

Rethinking Image Color Correction, Validation and Testing
D. Williams and P. D. Burns, Proc. IS&T’s Archiving  Conf.,  2016
Digital image capture normally includes a color-correction step that transforms detector signals into corresponding image pixel values. Measures of object color-capture are included in recent imaging guidelines for cultural heritage institutions. During the evaluation of the goodness of object-to-image color-encoding, which includes comparing the original target colorimetry to that of the predicted colors and calculating summary color-difference metrics for the population of target samples. The current summary statistics for evaluating color capture goodness can be misleading for the color content at hand. Additionally, reporting color error measurements for the same colors that were used to develop the color-correction is effectively ‘teaching to the test’ …

Evaluation of 3D-Projection Image Capture
P. D. Burns and D. Williams, Proc. IS&T’s Archiving  Conf.,  2015
It is now common practice to monitor imaging performance prior to, and during, image acquisition for digital collections.  While these methods have been applied to near-flat objects and documents, less attention has been given to developing reliable corresponding methods for two-dimensional perspective images , where optical depth-of-field can be critical. Focusing on the evaluation of image resolution over the macro depth/extent of the scene, we describe results of our effort to adapt standard methods to this new application. Cameras using simple, fixed lens and a tilted lens were evaluated.

Image Stitching: Exploring Practices, Software, and Performance
D. Williams and Peter D. Burns, Proc. IS&T Archiving Conf., 2013
The merging or stitching of separately captured portions (tiles) of an object into a single unified digital image is becoming increasingly popular in the cultural heritage community. Maps, negatives, tapestries are now included in digital collections. These can be digitally sewn together from component images. What and where are the hidden flaws in these stitched objects? Are certain content types more prone to stitching errors than others? Are there analytical tools to detect stitching errors or are visual assessments sufficient? What operational guidelines and software options offer the best stitching solutions?…

Targeting for Important Color Content: Near Neutrals and Pastels
D. Williams and Peter D. Burns, Proc. IS&T Archiving Conf., 2012
Successful imaging performance programs  include; establishing of performance goals, efficient test plans, and periodic performance auditing. These require the selection and adoption of test objects as references.  For collections predominated by near neutrals (e.g. paper, vellum, parchments), limited color gamut (e.g., watercolors), or near singular hues (early photographic prints), the capture of small color differences is not only important but problematic. This is largely because the color targets used today to calibrate digital capture devices were not designed to discriminate the subtle color gradations of such content.

Capturing the Color of Black and White
D. Williams and Peter D. Burns, Proc. IS&T Archiving Conf., 2010
For digital collections with limited color-gamut, or where detection of small differences in material properties is important, adopting collection-specific color test targets is often advisable. This can reduce metamerism, and sample the device signal space in the most important regions. As an example, the spectral-reflectance characteristics of a collection of early photographic prints were were characterised.

Preparing for the Image Literate Decade
D. Williams and Peter D. Burns, Proc. IS&T Archiving Conf., 2009
We describe how US and European initiatives will influence the requirements for both imaging performance, and how this will be managed in digital conversion projects. We interpret these developments in terms of the necessary tools and methods for quantifying and maintaining performance consistency. We describe the elements of a successful program; establishing of performance goals, efficient test plans and performance tracking tools, and interpretation for corrective action.

Measuring and Managing Digital Image Sharpening
D. Williams and Peter D. Burns, Proc. IS&T Archiving Conf., 2008
With the development of digital image collections, comes the opportunity to capture and manipulate captured object information not previously available with photographic methods.. We propose an approach for sharpening management within the framework of existing ISO standards by use of the spatial frequency response (SFR) as referred to a known or implied SFR aim.

Ten Tips for Maintaining Digital Image Quality
P. D. Burns and D. Williams, Proc. IS&T’s Archiving  Conf.,  2007
Digital collections have benefited from both the technology and price-volume advantages of the wider digital imaging markets. With the advent of web-based delivery, standard file formats, and metadata, however, have come a host of technology related choices and concerns about variability and compatibility. We suggest ten simple principles that can be used to increase utility and reduce variation of the digital image content for most collection projects.