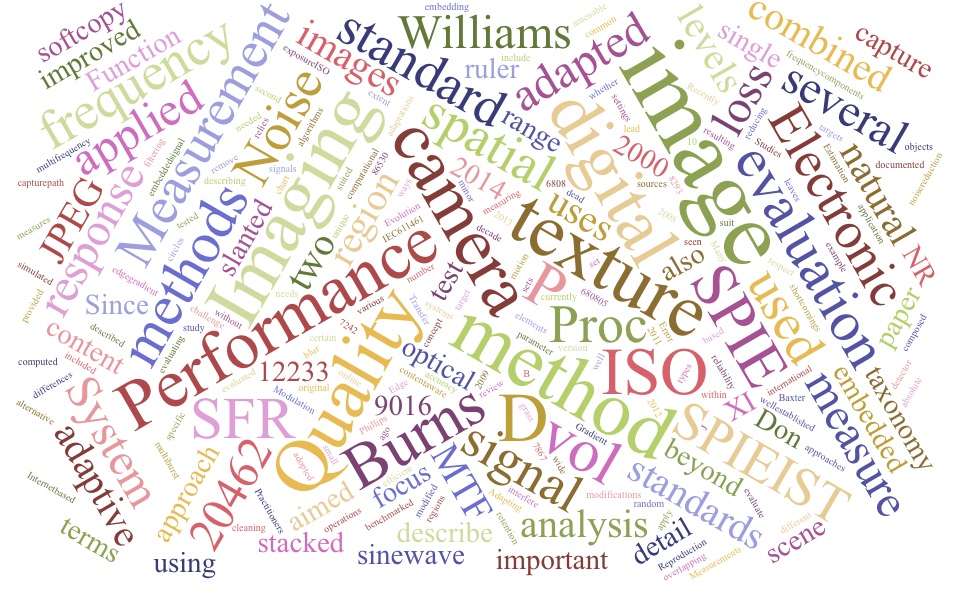 Word cloud for this page

Updated Camera Spatial Frequency Response for ISO 12233, P. D. Burns, K. Masaoka, K. Parulski, and D. Wueller, IS&T Electronic Imaging Symposium, Image Quality and System Performance (2020)
The edge-based Spatial Frequency Response (e-SFR) method is well established and has been included in the ISO 12233 standard since the first version in 2000. A new 4th edition of the standard is proceeding, with additions and changes that are intended to broaden its application and improve reliability …

Camera Resolution and Distortion: Advanced Edge Fitting, P. D. Burns and D. Williams, IS&T International Symposium on Electronic Imaging, Image Quality and System Performance XV, (2018)
A frequently used method for camera imaging performance evaluation is based on the ISO standard for resolution and spatial frequency responses (SFR). This standard, ISO 12233, defines a method based on a straight edge element in a test chart. While the method works as intended, results can be influenced by lens distortion due to curvature in the captured edge feature.  We use a polynomial edge-fitting method …

Texture MTF from images of natural scenes, R. Branca, S. Triantaphillidou and P. D. Burns, IS&T International Symposium on Electronic Imaging, Image Quality and System Performance XIV, pg. 113 (2017)
Implementation of automatic, adaptive filters in consumer imaging devices represents challenges to sharpness and resolution evaluation. The recent dead-leaves target is aimed at producing texture-MTFs that describe the capture of image detail under automatic non-linear, and content-aware processes. Our approach to the texture-MTF measurement that substitutes the dead leaves target with pictorial images is presented in this paper. Nine pictorial images, portraying a variety of subjects and textures, were set as targets for a DSLR camera and  …

Color Correction Meets Blind Validation for Image Capture: Are We Teaching to the Test? D. Williams and P. D. Burns, Proc. IS&T Internat. Symp. on Electronic Imaging 2016, IQSP-218.1
It is common practice for digital image capture systems to use a small number of de facto standard test targets. Unfortunately,  color (spectral-) characteristics of the colorants used may differ from those for the population of object/scenes to be captured. This can lead to poor color calibration of the system. We can treat color-correction (e.g. by a color-profile) as being a statistical model relating the detected image values and their intended (‘correct’) pixel values. Using a statistical approach we adopt a validation method aimed at determining the extent to which this model relationship between variables (the regression model) provides an acceptable description of the data.

Intrinsic Camera Resolution Measurement, P. D. Burns and Judit Martinez Bauza, Proc. SPIE Vol. 9396, Image Quality and System Performance XI (2015)
Objective evaluation of digital image quality usually includes analysis of spatial detail in captured images. Although previously-developed methods and standards have found success in the evaluation of system performance, the systems in question usually include spatial image processing (e.g. sharpening or noise-reduction), and the results are influenced by these operations. Our interest, however, is in the intrinsic resolution of the system. We present a method to measure an intrinsic spatial frequency response (SFR) computed from test image(s) for which spatial operations may have been applied. …

Evolution of Slanted Edge Gradient SFR Measurement, D. Williams and P. D. Burns, Proc. SPIE Vol. 9016, Image Quality and System Performance XI (2014)
As performance standards have developed for digital imaging systems, the MTF concept has been adapted and applied as the spatial frequency response (SFR). The international standard for measuring digital camera resolution, ISO 12233, was adopted over a decade ago. Since then the slanted edge-gradient analysis method on which it was based has been improved and applied beyond digital camera evaluation. Practitioners have modified minor elements of the standard method to suit specific system characteristics, unique measurement needs, or computational shortcomings in the original method. Some of these adaptations have been documented and benchmarked, but a number have not.  We describe several of these modifications …

Embedded Signal Approach to Image Texture Reproduction Analysis, P. D. Burns, D. Baxter, Proc. SPIE Vol. 9016, Image Quality and System Performance XI (2014)
Since image processing aimed at reducing image noise can also remove important texture, standard methods for evaluating the capture and retention of image texture are currently being developed. Many NR algorithms are ‘content-aware’, which can lead to different levels of NR being applied to various regions within the same digital image.  We describe an approach and target that uses natural image texture combined with a multi-frequency periodic signal. This low-amplitude signal region is embedded in the texture image. Two approaches for embedding periodic test signals in image texture are described. The stacked sine-wave method uses a single combined, or stacked, region with several frequency-components. The second method uses a low-amplitude version of the IEC-61146-1 sine-wave multi-burst chart, combined with image texture.  …

Measurement of Texture Loss for JPEG 2000 Compression
P. D. Burns and Don Williams, Proc. SPIE-IS&T Electronic Imaging Symposium, SPIE vol. 8293, 2012
Recently we have seen the development of image quality methods aimed at more adaptive operations, such as noise cleaning and adaptive digital filtering. An example of this is the measure of texture (image detail) loss using sets of overlapping small objects, known as dead leaves targets. In this paper we investigate the application of the above method to image compression. We apply several levels of JPEG and JPEG 2000 compression to digital images that include scene content that is amenable to the texture loss measure.

Sampling Efficiency in Digital Camera Performance Standards
P. D. Burns and D. Williams, SPIE-IS&T Electronic Imaging Symposium, SPIE vol. 6808, 680805, 2008.
One of the first ISO digital camera standards to address image microstructure was ISO 12233, which introduced the SFR, spatial frequency response. Often during camera testing, however, there is an interest in distilling SFR results down to a single value that can be compared with acceptable tolerances. As a measure of limiting resolution, it has been suggested that the frequency at which the SFR falls to, e.g., 10%, can be used. We use this limiting resolution to introduce a sampling efficiency measure, being considered under the current ISO 12233 standard revision effort.