IS&T is organizing the Archiving 2016 Conference, to held in Washington DC next April. Topics range from creating and managing collections, to technology and standards for digital (e.g. images) objects. The abstract deadline in 4 Oct. 2015. Info. here 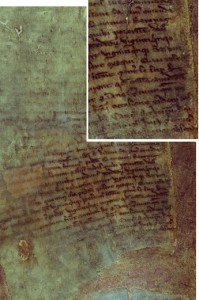 Multispectral Imaging : One topic for this conference is multispectral imaging. For example, at Archiving 2015, Fanella France (US Library of Congress) presented on Integrated Heritage Science Datasets. These often  include multispectral image records, and the results of technical analyses based on them.

British Library: Results from multispectral imaging of the 800 year old Magna Carta were on display at the recently completed exhibition at the British Library. This was carried out by the Centre for Conservation and the Scientific Research Lab., and is described by Christina Duffy, here.

The Laboratory uses a MegaVison (exhibitor at Archiving 2015) camera with 14 spectral bands from near ultraviolet to near infrared.

From the Hebraic Manuscript Digitisation Project, the British Library

Connection: Archiving 2016 will be held in the Archives 1 Building in Washington DC, where the US Constitution and Bill of Rights are displayed. Both were influenced by the Magna Carta and part of the Magna Carta: Law Liberty, Legacy exhibition. I was rather surprised that two of King John’s teeth were also on display in London. I understand they were removed post-mortem, so they are not the result of early English dentistry.