Recently the UK Royal Mint issued a set of ten-pence coins, the A to Z 10p Collection. Below is part of a picture posted by Sharon Henley, head of Marketing at the Mint. Preparing for the Archiving conference (#Archiving2018) next month, this got me thinking about old and new coin circulation. Those we keep and those that return, sometimes unnoticed, after our travels. 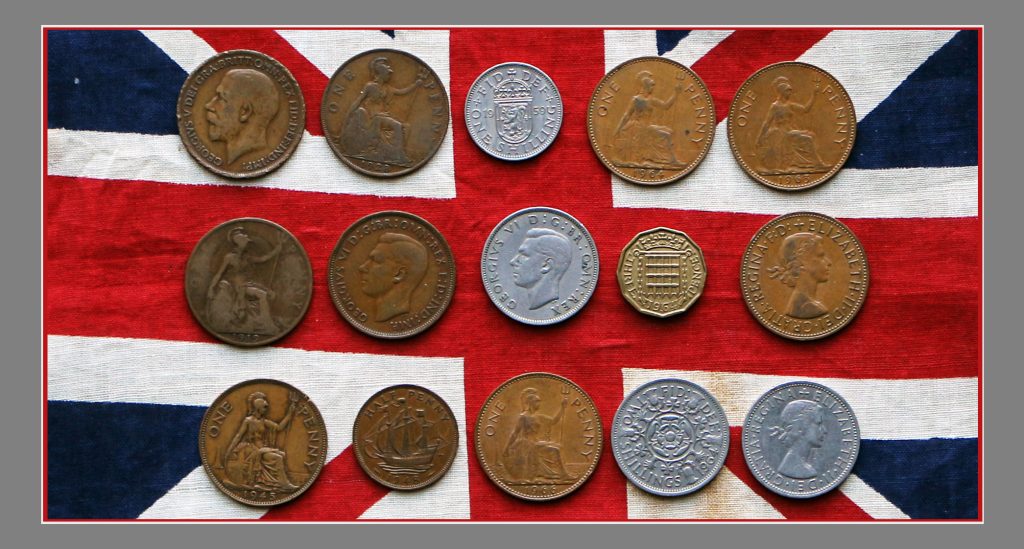 Some people say it’s folly, but I’d rather have the lolly …

First, I am not a collector but I do find stamps and coins interesting. Coin designs are usually meant to celebrate, document, or at least note, the issuer’s history, culture and government in a serious way. The A to Z 10p Collection coins are quite different. They celebrate things British that are both unique and common-place. They are angelic, monstrous, sporting, double-deckered, full-English, ‘henged, oaked, parliamentary, artistic, and the rest.

Please note these are serious matters, and by all accounts the collection is highly successful.

Well, in our private coin ‘collection’ (stored for random-access in dresser drawers) we have quite a few coins from quite a few places. Checking the countries and dates, it is easy to discern an approximate record of family travels. Having extended-family members (whom I have visited) in five countries, and traveling rellies results in a fairly wide net. An approximate sampling of time and place.

Those from the UK show a few that were in circulation when we emigrated, just prior to conversion to decimal currency (1971). Some are much older, of course, and represent the random, or ‘interesting because they are old’ group. Two 1919 pennies are probably from Grandpa. However the 1945 half-penny was recently given by local friend, but could not resist including it. My more recent visits to England are also represented.

We also have Panamanian Bolivars and Australians pennies (and cents), alongside our neighbours’ Mexican pesos and Canadian loonies. Then there are the others,

We found lots of others of course, but then …. maybe I am a collector – of connections to family, colleagues and friends, via the things that end up at home. Bet you have few too.

p.s. The Union Flag (I think) is one that was sewn on a backpack that traveled through Europe with my younger brother as a university student. Wonder if he wants it back.