Although it might seem simple today, ten years ago adding your own pictures to an on-line advertisement was novel. Then a Kodak employee, I noticed the following on the company web site,

Using an exclusive, free online tool, visitors to www.kodak.com can import up to five of their digital pictures into Kodak’s Gallery commercial, then view their own “edit” of the 60-second spot. You may then share the commercial with any number of e-mail recipients. Your personalized Gallery commercial – complete with music, scenes, and dialogue from the original TV commercial – will remain viewable via the email link for a minimum of 30 days.

Kodak Gallery had me at free, my own pictures, publicly viewable. I tried it, and figured out how to download the resulting video file – not easy because that was not Kodak’s intent.

Well, I added a few images of imaging test charts that Don Williams and I were starting to use at library and archiving institutions. I sent the file to a couple of friends. 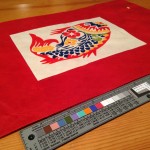 Fast forward to 2016. I recently stumbled on a reference to Kodak commercials and found a version of the original on YouTube. I have approximated my original effort by editing the version that I used in 2006. In fact I have done more (title, credits, etc.) – all with free software, as before. I include a few ‘nuggets’ at the end. The video quality is, of course, limited by the version posted, but it should look OK on a small screen.

From the Kodak press release, ten years ago last Monday.

ROCHESTER, N.Y.–April 3, 2006–Now, you can be in pictures. Kodak invites you to join the millions of TV viewers who were captivated last year by an emotion-filled commercial in which countless photos were preserved and shared in an infinite “Kodak Gallery.”

1 thought on “Ten Years After: Every Story Tells a Picture”