I recently chaired an IS&T Archiving 2016 conference session on Advanced Imaging Techniques. My role included introducing Fanella France, US Library of Congress, presenting Spectral Imaging for Preservation Documentation. An example cited was the discovery that in the US Declaration of Independence Thomas Jefferson had originally used the word subjects, but changed this to citizens. The interpretation being that Americans would not be subjects of the crown, but a people (citizens) whose allegiance was to one another.

Later that morning, I mentioned this and suggested that perhaps conference attendees from Commonwealth** countries might like to check which they are considered. I intended this as a light-hearted comment, the type that session chairs make as people shuffle back from a coffee break. Conference proceeds – considered successful – splendid time had at NARA. Little did I know …

A few of days after the conference, visiting my parents, while looking in a sock drawer, I discovered several expired family passports for my mother and her father. Having looked at the stamped visas and the passport holder information (expected, but still interesting), I happened to notice the front covers. Curious that my maternal grandfather’s 1961 Australian passport had the title; British Passport, and below the crest, Australia. Mum’s more recent 1979 passport simply said Australia Passport. Both also had the royal crown insignia, but a 1985 version did not. What’s all this? 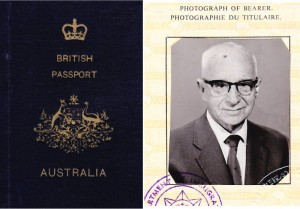 Expired passport for Fred, aka Pa, issued in 1961

After a simple search one learns that in 1967, the word British Passport was removed from Australian passports, but the Crown was kept. The word Australia appeared below the Crown, followed by the Australian Coat of Arms and the word Passport. The crown was removed in 1984.

I learned a few things from Archiving 2016 that I had not anticipated, but that is part of the fun, isn’t it?

p.s. I found some UK ration books and a travel journal, but these stories are for another time.

*With apologies to Dr. Fanella France –  I could not resist since Mr. Jefferson was United States Minister to France (which most of you reading this far will  already know)

** Commonwealth of Nations: the pink bits on globes and maps of my youth